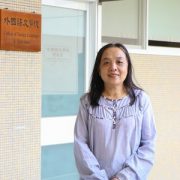 The College of Foreign Languages and Literature at NCCU offers twenty-six language programs, which represents the largest number of language programs offered in Taiwan. Indeed, the Department of Arabic Language and Culture, along with the Department of Turkish Language and Culture, are the only programs on Arabic and Turkish languages in Taiwan. The book series Sharing Taiwanese Culture in Foreign Languages is written in nine languages: English, French, German, Spanish, Japanese, Korean, Turkish, Arabic, and Russian. A Mandarin translation is also featured in the series, making it even more convenient for readers from all countries and offering the opportunity to learn each other’s mother tongues.

In addition to language learning, the College of Foreign Languages and Literature also places strong emphasis on cultural exchange. There are ten chapters in each book of the series, and the contents will be tailored to the customs and conditions of each country. Taiwanese gourmet and festivals, however, are the common motifs throughout the book series. The Dean of the College of Foreign Languages and Literature, Dr. Rachel Juan, stresses that the book series will “present local culture sensibly, and instill in people a sense of fun and the desire to come to Taiwan.”

“Students are our best ambassadors,” said Dr. Rachel Juan. Before the outbreak of COVID-19, at least half the number of students in a single school year go abroad for exchange each year. She also mentioned that a student from the Department of Slavic Languages and Literature went to Russia as an exchange student and shared Taiwanese culture with the locals, which was published in the local newspaper and helped place Taiwan on an international stage. It was a beautiful example of cultural exchange.

Dr. Rachel Juan believes the first step of establishing cultural exchange is knowing one’s own culture. Next, one should think about how to share it with other people in a friendly and enthusiastic way. The book series is a very useful way for people to introduce Taiwanese culture in an approachable manner. “There are so many little insights. Foreigners are going to be intrigued by it.”

Nearly twenty Taiwanese and foreign faculty members from the College of Foreign Languages and Literature spent two years co-authoring and completing the book series, which has been printed in full-color. Professor Pin-jie Yue and others from the Department of Japanese, as well as Mr. David Yu, a renowned California-based photographer and alumni of the Department of Slavic Languages and Literature, provided some of the photographs for free. “We should help to push the influence of local culture,” said Dr. Rachel Juan, “and by contributing to society, allow even more people to get to know Taiwan.”